Capital Smart City is the best housing society in Islamabad and Rawalpindi That Offers Smart Features and Fruitful Investments Opportunities for the residents and investors.

A Smart Investment for Your Future!

Capital Smart City Islamabad is the first housing society in Pakistan that is being commissioned on the smart city concept. The concept of a Capital Smart City is based on the collection, storage, and deduction from real-time data. The Islamabad CSC  is a project of Habib Rafiq Limited and is being developed under the consortium of Habib Rafiq Ltd’s sister concern Future Development Holding. The Capital Smart City Islamabad has been planned to provide eco-friendly and sustainable living to residents. CSC is set to be located near Thallian interchange on the Motorway M2 in close proximity to New Islamabad International Airport. This is the only housing society, approved by RDA, to be granted formal permission of FWO and the National Highway Authority to construct a motorway interchange. Since its debut in 2018, CSC Islamabad has seen an increase in demand. Location and developer’s repute are two main points that real estate investors in Pakistan consider before making an investment. When it comes to the reputation of the developer, Habib Rafiq Limited has an excellent record of developing the Defense Housing Authority, Bahria Towns, and Multan International Airport, etc. Apart from this, HRL is also the developer of Royal Orchard Multan and all upcoming Royal Orchard Societies in Pakistan.

Book Your Residential & Commercial Plots in Capital Smart City at the Best Prices!

The Islamabad Capital Smart City enjoys a premium location in the suburbs of Islamabad and Rawalpindi. The society lies near the Thallian Interchange on Islamabad – Lahore Motorway M2. The housing society is at a 5-minute drive from New Islamabad International Motorway. On the other side, the housing society bisects Chakri Road from Rawalpindi. CSC is one of the only societies in the area that has a No Objection Certificate (NOC) from the Rawalpindi Development Authority (RDA). Also, this society has also been approved by the National Highway Authority (NHA) and FWO to construct a dedicated interchange on Lahore – Islamabad motorway. The location also lies in close proximity to the proposed Rawalpindi Ring Road as well as the upcoming China-Pakistan Economic Corridor (CPEC) route. According to the location and map of Islamabad Capital Smart City, the CSC is set to be constructed on a land area of 60000 Kanals. The river Sill and adjunct Chauhan Dam lie within the housing society. It is one of the only housing societies in the region that has access to natural water resources. Apart from this, the housing society is strategically located to enjoy undisrupted access from the major roads of Rawalpindi and Islamabad.

Plots for Sale in Islamabad Capital Smart City are available at affordable pricing and easy installment plans. The total amount has to be paid in 14 quarterly installments. The booking of plots in all blocks is open and available at Deal & Deals (PVT) Ltd.

The CSC is divided into three main blocks which are designed on state-of-the-art infrastructure. The blocks are:

Executive Block of the CSC is meant for the general public of Pakistan. The installment and payment plan of Islamabad Capital Smart City  Executive Block starts with as low as a 10% down payment while the rest of the amount is to be paid in equal quarterly installments. The plot sizes available in Executive Block are:

The Islamabad Capital Smart City Overseas Block is being specifically developed for the Non-Resident Pakistanis. According to the developers, the CSC overseas block is being developed as a separate gated community provisioning all civic amenities. Like the executive block, booking starts at 10% for CSC’s Overseas Block as well.

The CSC harmony block is a unique demarcation within CSC. The harmony block is being designed by keeping in view the needs and necessities of the Pakistani working class. Apart from plots, CSC is also offering Villas at affordable prices in the Harmony Block.

The plot and villa sizes in the Harmony block are all 3.5 Marla.

Here are some salient features of this remarkable project.

The Overseas Prime Block of the Capital Smart City is located at the highest location within the locale of CSC. The community offers a complete panoramic view of the surroundings including the majestic Chauhan Dam and the Khairi Murat Mountain Range

An international standard 18-Hole golf course will be a part of the Overseas Prime Block. The Gold Course is being designed by internationally acclaimed Peter Harradine. The community will be built around the golf course.

The Overseas Prime Block of the Capital Smart City is being developed at a location that will give a beautiful and scenic view of the upcoming dancing fountain as well as Pakistan’s biggest Ferris Wheel.

The Overseas Prime Block of the Capital Smart city is all set to have its own smart security infrastructure. Advanced biometric and facial recognition is being deployed that will only allow the residents to enter the community. Apart from smart security systems and infrastructure, a special rapid response force will be deployed across the overseas prime block to ensure 100% safety and quick emergency response.

The overseas prime block of Islamabad Capital Smart City has exclusive but limited residential plots. Like the rest of the Capital Smart City Islamabad, the plot sizes in the overseas prime block start from 7 Marla and go up to 2 Kanal. Since the community will be an ultra-luxurious and modern community, the prices of this block are a bit higher than the rest of the smart city blocks.

A very limited inventory of 4 marla commercial plots in Capital Smart City Islamabad is available with Deal & Deals. According to the real estate specialists at Deal & Deals, the commercial investments in Overseas Prime Block have always turned out to be fruitful for our clients. The previous commercial plot bookings in the executive and the overseas blocks of CSC have already yielded a profit for the early bird investors. 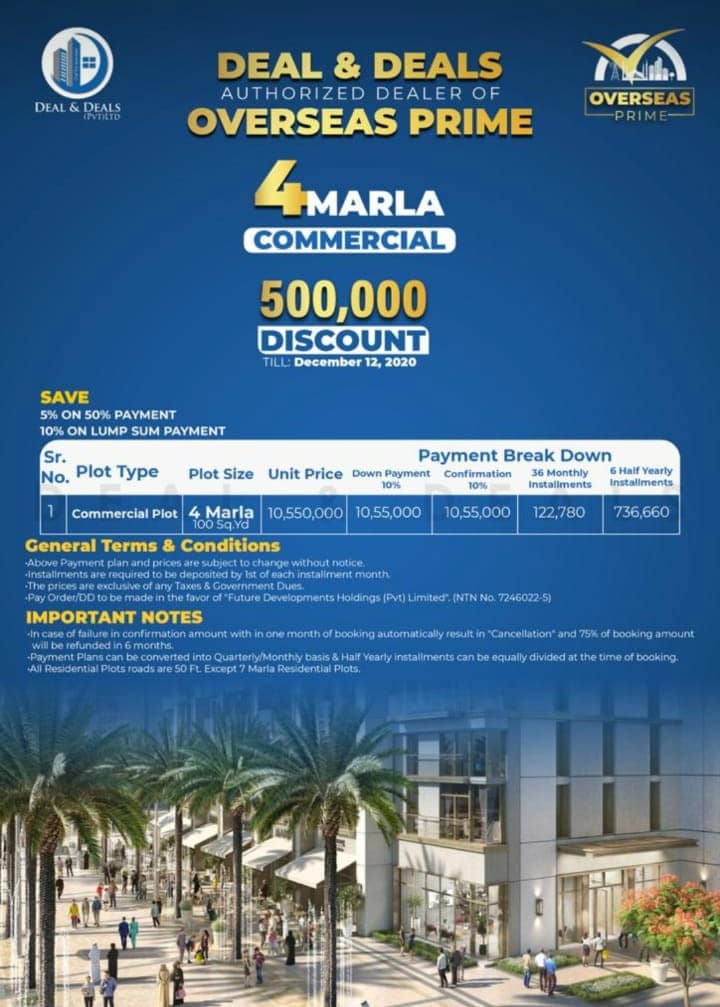 And this is it! Your plot in the capital smart city is booked.

CAPITAL SMART CITY ISLAMABAD approved by RDA, is an upcoming sensation when we talk about the luxurious lifestyle in Pakistan. It will be the first of its kind developed in the beautiful capital city of Pakistan, Islamabad. Situated near the New Islamabad International Airport and the Ring Road Rawalpindi, this project features Grade 8 developments and one of the most famous housing schemes in Pakistan. It is designed to meet the future expectations of its residents. The society has a plethora of unique features to meet the speculations of its residents, is designed to provide the ideal foundation for the investors and buyers to raise their families in the utmost peaceful and eco-friendly environment in Islamabad. Synchronizing technology with lifestyle, Pakistan’s very first smart city aims to make your life easier. CSC Islamabad is overflowing with investment opportunities. It offers an exciting look into the future through its blend of nature and technology.

This project offers a dynamic range of Capital Smart Homes with some of the most advanced Housing features in Pakistan’s capital, Islamabad.

CSC Islamabad ensures a smart environment where technology and innovation are used to ensure all the advanced needs of residents.

CSC promises comfortable and luxurious living standards to its valuable residents along with the best housing services in Islamabad.

With an advanced housing infrastructure and transport system for mobility needs, CSC is designed to ensure maximum convenience.

The project has a solid waste disposal system and it ensures a full time supply of electricity and water to accommodate all its residents.

The master plan of Capital Smart City is uniquely designed to project a spontaneous outlook and enhance the natural features of society to create an eco-friendly environment.

CSC’s location exhibits a natural and eco-friendly atmosphere where an environment filled with tranquility and peace is ensured with green development.

An impressive feature is its vivacious entertainment projects such as 3D Cinemas and Theme Parks providing its residents with a splendid recreational experience.

Book Your Residential as well as the Commercial Plots at the Best Prices in Capital Smart City!

What is the CSC Area?

Capital Smart society Islamabad covers an approximate land of 55,000 Kanal. It is approximately ten-fold bigger than its neighboring projects. It will be one of the closest housing societies to the new Islamabad International Airport.

Will the CSC Building Plan be expanded in the future?

In the case of a CSC DHA merger, the plan of this project will be expanded as more blocks and areas will be added to it and it will be become even bigger in the near future.

When will the society grant possession of plots?

Society has announced balloting and will be giving possession soon.

Where is the CSC Head office?

What is the CSC Islamabad Payment Plan?

The CSC payment schedule can be divided into two major categories. The first option available to customers is that they can make a lump-sum payment. The second option is the installment plan with a 10% down payment and quarterly installments afterward.

When will the work on interchange start?

The work on interchange will start in the first quarter of 2020.

Is CSC a legal society?

Yes, CSC is a legal society, and its No Objection Certificate is approved by RDA.

What is smart city and how is it different from other cities?

CSC is equipped with the latest technologies and its highly automated, in this way its different form other projects as they do not possess these characteristics.