Lahore Smart City, the 2nd Smart City of Pakistan in the city of gardens. This Smart City is all set to unlock your great investment future in this mega-metropolis of Pakistan!

Lahore Smart City is set to be located along the Lahore By-pass road with close proximity from N-5 GT Road and Islamabad – Lahore Motorway. The LDA approval for the Layout plan is under process!

Future Developments Holdings (Pvt) Limited and Habib Rafiq (Pvt) Limited are collaborating on the Lahore Smart City project. These are the names of two major real estate developers in Pakistan. Both of them are experts in their respective fields. They are also well-known around the country for their large projects. HRL is responsible for many well-known projects, including Bahria Town, DHA, the Motorway, and others.

Future Holding Developments (Pvt) Limited is a leading asset management and real estate developer in Pakistan. They contribute to the construction of modern smart cities that provide not only a luxurious lifestyle but also financial benefits to their clientele. The Companies Ordinance of 1984 also applies to FDHL. Several national and international entities collaborated to build this organization which is top real estate leaders with expert-level technical and leadership abilities.

Habib Rafiq Pvt. Limited is another top-tier construction firm in Pakistan. They’re well-known for their award-winning engineering and construction achievements throughout the past fifty years. Certainly, their success is the consequence of their unwavering commitment and dedication to the client’s needs and their job.

Contact us to Book Your Plots at Lahore Smart City!

The master plan of Smart City Lahore has been originated by a consultancy firm based in Singapore, named Surbana Jurong (SJ) while Norman Foster is a designer of this project. In planning this mega project, Surbana Jurong has successfully transferred the Europe development idea. It offers a diverse range of housing options, depending on density.

The Lahore Smart City has a total land of 20,000 Kanal. The administration has initially created two blocks that are solely for residential use:

The Executive Block is for the investors who want to live a smart lifestyle. This block will be equipped with all of the modern conveniences that make life easier. Plots are currently available in the following categories:

The Overseas Block is reserved for international visitors. It is the most secure and major investment option for Pakistanis living abroad. It was created specifically to fulfill the needs of Pakistanis residing abroad. Plots are currently available in the following categories:

Lahore Smart City is a registered housing society with the approval of the Lahore Development Authority (LDA). The No Objection Certificate (NOC) allows a housing community to give all the amenities to its residents legally. A government-designated building and development regulatory authority issue it. As a result of the Lahore Smart City NOC update, the project will have access to all basic services such as water, gas, and electricity.

Location plays a primary role when making real estate investments. It is vital for a real estate investor to know about the pros and cons of a property’s location before investment. Like Capital Smart City Islamabad, the proposed location of LSC is all set to be connected via major road networks to and from Lahore. As per the sources, the proposed location of LSC will be along the Lahore By-pass road with easy accesses from N5 GT Road and Lahore – Islamabad Motorway (M2). The proposed location of Lahore is one of the best in the region because of its ease of access from the main Lahore city areas. Real estate veterans have welcomed the debut of LSC. According to some real estate agents, this project has the potential to become as successful as Bahria Town. The agents reiterate the fact that LSC’s proposed location enjoys great access from 2 major road networks connecting Lahore with the rest of Pakistan. This makes it a premium investment hotspot for investors who are looking for positive mid-long term yields on their investments.

The executive and overseas blocks of Lahore Smart City are set to include the following sizes of plots:

As per sources, the Lahore Smart City location and the map are officially released by FDH and they are designed appropriately.

These rates are subject to revision soon. Also, the above-mentioned payment plan for LSC does not include development charges and all of these plans are based on 3.5 years installment plans. 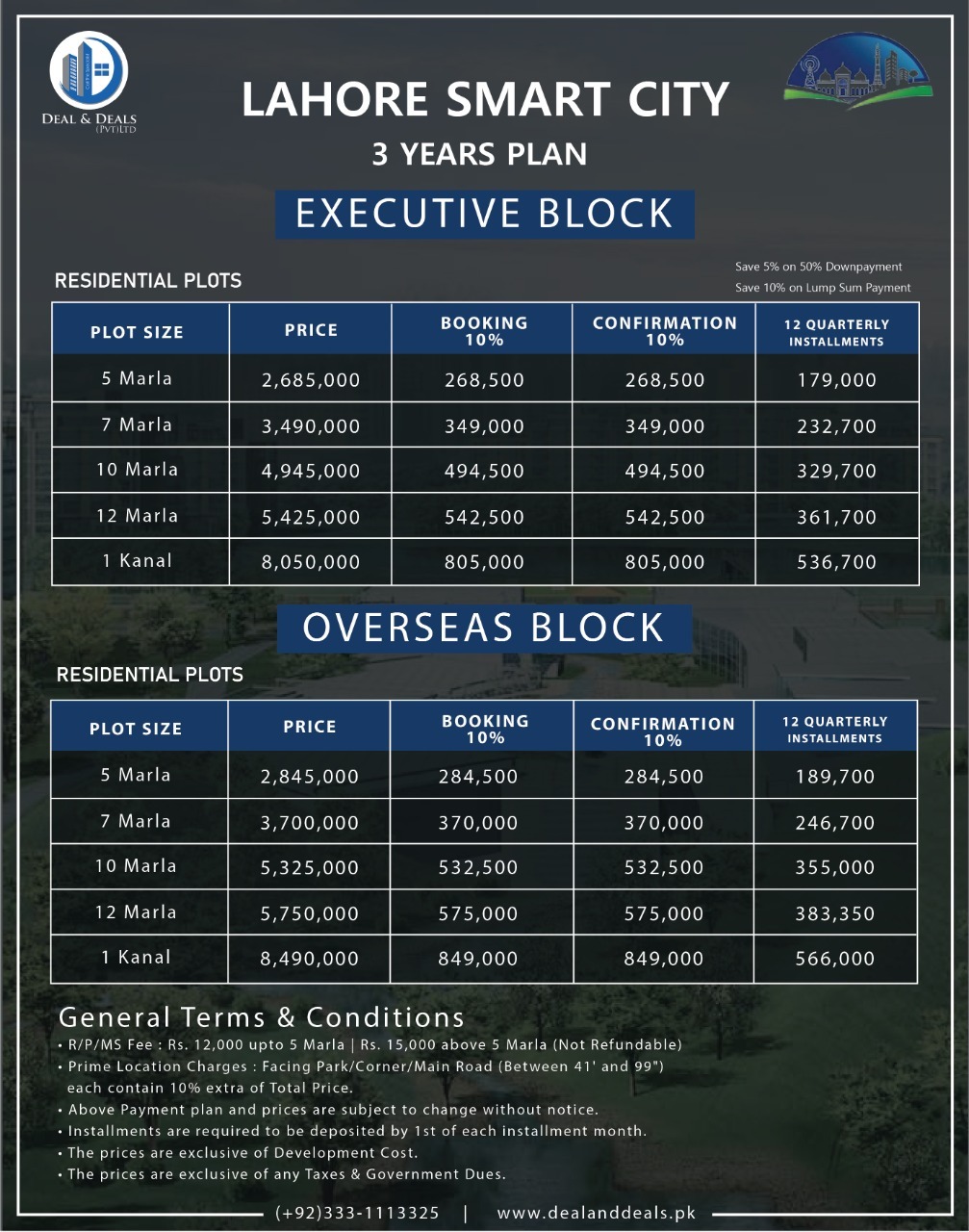 The Lahore Smart City is all set to launch along the Lahore By-pass road. This housing society is initially planned on 20000+ Kanals of land and will replicate the international standards of infrastructural development as being carried out in Capital Smart City Islamabad. The location of Lahore Smart City makes it a worthy society for mid-long term real estate investments.  Like Capital Smart City Islamabad, the LSC is also divided into two main residential blocks i.e. overseas and executive blocks.

The booking process of Lahore Smart City is easy and smooth if done through Deal & Deals.

And this is it! Once you have submitted the form, your plot will be booked in your name. All other formalities will be taken care of by Deal & Deals.

The management has launched 4 Marla & 8 Marla plot categories in the Commercial Block of Lahore Smart City on affordable pricing when compared with neighboring societies. All sorts of potential buyers are interested in commercial investment in this society, and according to property insights, this commercial block is going to be sold out soon.

The total number of installments to be paid to get commercial plots on Installment is 14 which is quite manageable. No doubt, Lahore Smart City Commercial is a huge success.

Lahore Smart City is situated in a beautiful hilly area surrounded by greenery. You can enjoy breathtaking sunsets and a peaceful environment while remaining in proximity with the main city.

LSC NOC has been duly approved by the LDA, and it is considered to be one of the top legal housing societies in Lahore. You can buy plots in LSC and secure your future.

For security across LSC, there is a high-tech mechanism of reliable video surveillance, installed throughout the society in order to meet the security needs of its visitors and residents.

As load shedding or power shortages are considered to be a major threat to businesses across the country, LSC has an underground electricity system, which are is backed up with generators to keep the power on.

The LSC main boulevard is a massive 200-feet long one which is considered to be one of the largest and iconic structures in the housing society. With beautiful greenery on the side, a refreshing outlook is imparted.

Contact us to Book Your Plots at Lahore Smart City!

Lahore Smart City is set to revolutionize the way housing societies are developed in the city. Deal & Deals is an authorized dealer and platinum partner of Lahore Smart City. A very limited inventory is available in executive and overseas blocks and you can book your plot today by filling the form.

Who are the developers of Lahore Smart City?

The developers of Lahore Smart City are Habib Rafiq Limited – HRL. The group enjoys an impeccable reputation in Pakistan as they have myriad real estate projects completed and delivered. HRL has previously delivered turnkey urban settlement projects for DHA, Bahria Town, and the Government of Pakistan.

According to the developers of Lahore Smart City, the process of LDA approval is under progress and Lahore Smart City will be given a No Objection Certificate (NOC) for planning permission and infrastructural developer soon.

How much land is with Lahore Smart City?

Where is Lahore Smart City located?

Lahore Smart City is conveniently located on the main Lahore By-pass road. It is located in the Northern Suburban Lahore and lies very near to the Kala Shah Kaku GT Road Interchange, Lahore – Sialkot Motorway, and Lahore – Islamabad Motorway.

How to buy a plot in Lahore Smart City?

What are the payment options for Lahore Smart City?

The initial booking of a plot in Lahore Smart City is done through online remittance or pay order made in favor of Future Development Holdings. The subsequent installments are also paid through cash to the management of Lahore Smart City. For more details and customizing your payment plan, get in touch with Deal & Deals.